UltraThistle® is prescribed by doctors because it is much more effective at reaching and protecting liver cells than any other milk thistle formula.

I've been taking milk thistle products for several years now. A few years ago I discovered UltraThistle®. Over these same years I've had regular lab work done in regard to my liver function. Even though I suffer from liver disease, my liver is functioning normally as has been documented by my lab work! I believe this is in a large part due to the UltraThistle® I've been taking. 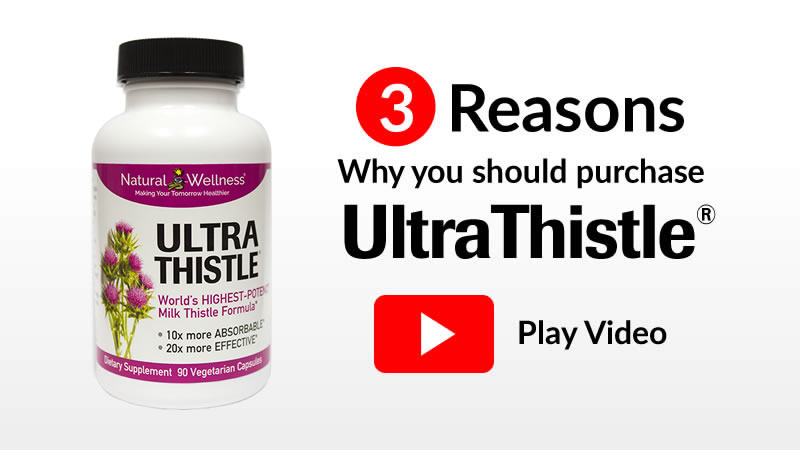 Medical research indicates the active ingredient in UltraThistle® is better absorbed, and produces better results, than any other silymarin or milk thistle extract. Additionally, this formula is part of an ongoing hepatitis C treatment research study at a foremost medical school AND a new hepatitis C dosing study at a major university medical center. This scientific validation explains why more and more doctors are prescribing UltraThistle®. And why more and more patients are choosing it to protect and support their liver.

What is the evidence to support the claim that UltraThistle® is significantly better?

This is the same question asked by doctors before giving UltraThistle® their approval. Several human and animal studies have shown UltraThistle® is dramatically better absorbed. In one study, the excretion of silybin in the bile was evaluated in patients undergoing gallbladder removal because of gallstones. A special drainage tube, the T-tube, was used to get the samples of bile necessary. Patients were given either a single dose of UltraThistle® or silymarin. The amount of silybin recovered in the bile within 48 hours was 11% for the UltraThistle® group and 3% for the silymarin group. This is nearly 4 times more in the bile.

In another study designed to assess absorption, plasma silybin levels were determined after administration of single oral doses of UltraThistle® and a similar amount of silymarin to 9 healthy volunteers. The authors concluded UltaThistle was absorbed into the bloodstream roughly 8 times greater than regular milk thistle extracts standardized to contain 70-80% silymarin.

Are there any scientific studies clearly indicating better results with UltraThistle®?

Several clinical studies have also shown UltraThistle® to produce better results than regular silymarin extracts. In one study of 232 patients with chronic hepatitis (viral, alcohol, or drug induced) treated with UltraThistle® at a dosage either 120mg twice daily or 120mg three times daily for up to 120 days, liver function returned to normal faster in the patients taking UltraThistle® compared to a group of controls (49 treated with a commercially available milk thistle extract standardized to contain 70% silymarin; 117 untreated or given placebo).

Better results were also seen in a preliminary study in patients with chronic viral hepatitis (3 with hepatitis B, 3 with both hepatitis B and hepatitis C, and 2 with hepatitis C) given UltraThistle® for 2 months. After Treatment, serum malondialdehyde levels (an indicator of lipid peroxidation) decreased by 36%, and the quantitative liver function evaluation, as expressed by galactose elimination capacity, increased by 15%. A statistically significant reduction of liver enzymes was also seen: AST decreased 17% and ALT decreased 16%.

At all tested doses, UltaThistle® produced a remarkable and statistically significant decrease of mean serum and total bilirubin levels. When used at the dose of 240 or 360mg per day, it also resulted in a remarkable and statistically significant decrease of the ALT and GGTP liver enzymes. These results indicate that even short-term treatment of viral or alcohol-induced hepatitis with relative low doses of phosphatidylcholine bound silymarin can be effective, but for the best results higher doses are indicated.

Order UltraThistle® or Buy from Amazon

How does better absorption relate to better results?

Through the Phytosome process UltraThistle® supercharges the absorption of the most beneficial component of milk thistle and exponentially increases its ability to reach and protect liver cells.*

Using supercharged absorption for greatest effectiveness, UltraThistle® gets 8 to 10 times more silybin to your liver than any common 80% standardized milk thistle extract.*

The following chart of clinical study results accurately represents the superior systemic delivery of silybin when administered as part of UltraThistle® versus 80% standardized silymarin or pure silybin. Notice how much more silybin reaches the bloodstream, and therefore the liver, when absorption is supercharged by the patented Phytosome® process.

Again, you must remember that absorption is critical to the effectiveness of any therapeutic agent. Silybin cannot help your liver if it doesn't get into your bloodstream. Without the Phytosome process used to make Siliphos®, very little silybin is absorbed. If you are currently taking an 80% standardized milk thistle product (the most common available under numerous brand names) your results are represented by the green line on the chart. Pure silybin is represented by the yellow line. And UltraThistle® is represented by the red line.

This chart clearly shows how much more protection get to your liver with UltraThistle® (red) compared to 80% standardized (green).

What is the dosage recommendation for UltraThistle®?

Based on the clinical study data, when maximum liver protection and support is needed, the dosage recommendation is 360mg three times per day. This is three capsules per day. One bottle of UltraThistle® is a one month supply at the recommended dosage.

Is there any danger in taking this higher dosage of such a powerful remedy?

The German government did extensive research on milk thistle formulas and found that milk thistle has no known contraindications, no known drug interactions and no toxicity. In fact, German doctors prescribed enough milk thistle to liver patients in 1998 that sales exceeded $180 milllion in that country alone.

No drug interactions are known. One report has noted that one ingredient in milk thistle, silybinin, can inhibit the bacterial enzyme, beta-glucuronidase, which helps oral contraceptives work. Milk thistle could therefore reduce the effectiveness of oral contraceptives. Please consult your health care provider prior to starting any new treatment or with questions regarding your medical condition.

Where can I learn even more about scientific studies regarding UltraThistle® and its active ingredient?

Bastyr University Medical School: The Bastyr Hepatitis C Clinic is treating and monitoring patients in order to "evaluate a science based naturopathic medical protocol for the treatment of people diagnosed with hepatitis C." The protocol calls for 360mg of Siliphos® - the exact dosage found in UltraThistle®. In fact, Dr. Standish specifically prescribes UltraThistle® to her Hepatitis C patients. More info...

National Institutes for Health: A clinical trial is currently being organized under the NIH to be conducted at the Medical University of South Carolina in Charleston to determine whether milk thistle has any adverse interactions with other prescriptions or over-the-counter medications. More info...

A clinical trial is currently being organized under the NIH to be conducted at the Mount Sinai School of Medicine to determine if treatment of Hepatitis C with milk thistle is more effective than no treatment in patients infected with both HIV and Hepatitis C. More info...

A clinical trial has recently ended that was organized under the NIH and was conducted at the University of Washington Medical School. Based on the success of earlier studies these researchers are looking at this same formula with regard to Hepatitis C patients who are not good candidates for conventional treatment. Because of its proven safety and effectiveness, they will be investigating what the beneficial results might be at higher dosages. More info...

Other Clinical Studies: Pharmacological and toxicological results, added to those found from pharmacokinetic studies, have provided the basis for clinical testing of Siliphos®. Clinical studies have been performed to evaluate the properties of this new complex in subjects with "pathological" impairment of liver function. The results, including the optimal tolerability obtained in these "extreme" clinical situations, give strong support for the use of Siliphos® for all liver concerns. More info...

How can I get prescription-strength UltraThistle® for myself?

Order UltraThistle® or Buy from Amazon

Sign up today to receive our free informative newsletter.

Rest assured, we will not rent your email to anyone.

This product seemingly has kept my hep c from progressing out of stage 1. I am very grateful to my dr. for telling me about this product. I have had nothing but excellent service from natural wellness company. I would like to thank you at this time for many years of great customer service.

I had NAFLD (20% of surface covered with fat) and a few lifestyle changes, some exercise and taking UltraThistle for 6 months - my latest check up revealed that the NAFLD has gone and my liver is functioning normally!!

Working good so far, trying to improve liver function of my fiance who is a heavy drinker. Dr. Said to keep taking it and after 3 months of using regular 'NatureMade' milk thistle and a month of 'Ultra Thistle' his liver #'s were back in the normal range.

I have to thank you and point out to others on the fence about putting their Liver Disease self-treatment on auto-ship for the rest of your life.....I am a long-time NAFLD patient and recently had to do something different because no matter what we do, this is a progressive disease. The products from Natural Wellness came and I received the immediate turn-around I was looking for and even though I am an old lady on low income, I had to decide this was the best choice for my life and the auto-ship idea is a Godsend. I had been taking Milkweed power capsules which stopped working. This new approach is terrific. Thank you Natural Wellness.

I had been drinking far too regularly (5 nights a week), exercising a few times a week and eating less than healthily. I had been taking a CVS brand of Milk Thistle thinking it would protect me. Wrong. Went to the Dr for a pain in my upper-right abs and my liver values (not surprisingly) were moderately elevated to AST/ALT 45/50. I freaked out, did a ton of research, and bought UltraThistle. Along with eating slightly better, only drinking on the weekends (2 nights), and busting my ass in the gym, a month later my liver values have decreased to 26/25. Obviously, my change in lifestyle helped, but about a week after I started taking this, the pain in my upper-right abs has gone away completely. I'd say this stuff works.

I am 59 yrs old & I have been using Ultra Thistle for about 4 months now due to an enlarged liver infused with fat that was making me very sick. The doctor said I may not be able to reverse it. My condition is technically called NASH. My liver is shrinking & I feel so much better. The doctor said I was doing amazing that he had only seen maybe 2 other patients in his entire career turn it around as quickly as I have. He said keep taking it & of course I have a strict diet too. My prognosis was doom & gloom & now I am reversing my NASH! I believe Ultra Thistle is my life saver & I will always take it.

I have used UltraThistle for years with great results. ANY research at all regsrding Milk Thistle will reveal its curative qualities. And of ALL the M.T. out there, Natural Welness' UltraThistle is hands-down the best - specifically in bioavailability. As an aside, my FibroSure numbers remain within specs while using UltraThistle. No taste, no belch, no ill effects - just a squeaky-clean liver! And the service from Natural Wellness has been superb. I'm no healthcare provider; however, I highll recommend BOTH & am in no way connected to either.